A smart new wearable fashion accessory could make round-the-clock cancer monitoring as easy as checking the time of day.

A smart new fashion accessory could make cancer prevention as easy as checking the time of day. A team led by bioengineers at Memorial Sloan Kettering Cancer Center, New York, NY, is developing an optical biosensing technology that transforms a Fitbit-style wearable device into a cutting-edge tool for round-the-clock diagnostic monitoring. The ultimate goal, said principal investigator Daniel Heller, is to improve the precision of diagnostic data while creating a patient-friendly alternative to invasive tissue biopsies.

Wearable fitness monitors are now commonplace for tracking heart rate, calorie intake, steps, and other general wellness indicators. This new device would propel wearables into the realm of active disease management. It’s based on infrared detection to probe directly through the skin for cancer-related biomarkers circulating in blood or accumulated in tissues. By replacing scalpels, needles, and endoscopes with a painless beam of light, it spares cancer patients the discomfort, anxiety, and expense of regular biopsies.

Reliably measuring cancer biomarkers while they are still in the patient’s body constitutes “a major step forward compared with standard biopsies,” Heller said. Current diagnostic methods still require doctors to collect a tissue specimen by surgical biopsy and send it to a pathology lab for analysis. Not only is the process harder on the patient but it also provides only a static snapshot of a tumor at a single point it time. Standard biopsies can’t be repeated every day, let alone every minute, he said. The wearable device, on the other hand, could continuously monitor disease activity, making it possible to detect the first signs of trouble in people at known risk for certain cancers, or in cancer survivors with high risk of recurrence. For patients currently in treatment, the technology would indicate in real time whether or not a drug is working, or if the patient’s tumor is developing resistance to it. 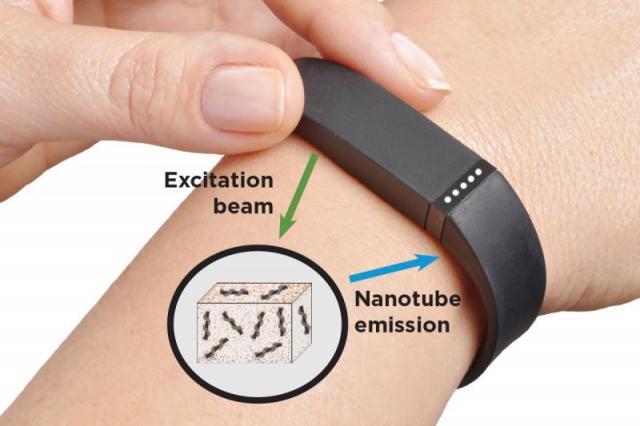 A small device worn on the wrist could send light into the sensors (excitation beams) and analyze the light coming back out (nanotube emission) to provide constant updates. Image: Memorial Sloan Kettering Cancer Center

The basic technology is designed for through-the-skin detection and measurement of key cancer biomarkers called microRNAs circulating in the bloodstream. The external optical and electronic components, which would have occupied an entire laboratory bench 10 years ago, fit inside a slim-line watchband-style device. As stylish as the wearable gadget may be, the real action takes place within the novel biosensors implanted at key sites in the patient’s body. Made from innumerable needle-like carbon nanotubes, the sensors are fabricated to attract and bind with specific molecular biomarkers circulating in the blood. Multiple sensors for different cancer biomarkers can be combined to measure many different cancer biomarkers at once.

To start monitoring, an infrared excitation beam from the external device is transmitted through the skin on to the nanosensor implants. Under optical stimulation, the sensors absorb a quantity of the IR energy and re-emit it back through the skin to the device’s external detector. The returning signals are analyzed to calculate biomarker levels as an indicator of a cancer’s current stage and rate of growth. In principle, the wrist-worn device could be configured in other ways to monitor implants placed in tissues without a readily available blood supply.

The tiny targets for these measurements are small segments of noncoding genetic material known as micro- (or mi-) RNAs, which are fast becoming one of today’s most studied and talked about classes of biomarkers. MiRNAs offer a number of potential advantages over many of today’s most widely used cancer biomarkers. There is considerable work ahead to identify effective biomarkers for particular cancer sub-types and to fully understand the underlying biology, but a number of promising markers have been found for many cancer types, including some like pancreatic cancer that are now almost impossible to detect early.

First discovered in 1993, microRNAs (miRNAs) are small, noncoding RNA strands that control key biological processes such as protein expression in normal cellular function. In cancer, miRNAs go haywire and execute a number of aberrant functions that drive disease progression. But as they do, they exhibit characteristics that can be measured and correlated to specific sub-types of cancer like a molecular fingerprint. Currently, it still requires complicated laboratory bioanalysis methods of biopsy samples to study miRNA biomarkers, but advances in optical measurement and nanotechnology are making concepts like the cancer tracker more viable for faster, more patient-friendly screening and diagnosis.

By combining the sophisticated engineering of wearable health monitors with the diagnostic power of miRNAs, the MSKCC team is addressing one of the most vexing dichotomies in cancer medicine: early detection saves lives but many of our early detection methods do patients more harm than good.

Their timing is impeccable. Some of the most widely used biomarker-based cancer screening tests are now falling out of favor. Most tests can’t tell doctors what they most need to know, and yet they make cancer care much more costly, risky, and stressful for patients. One high-profile case in point is the protein-specific antigen (PSA) test for prostate cancer. Until recently recommended annually for men of a certain age, routine PSA testing is now discouraged by the U.S. Preventive Service Task Force, patient advocacy groups, and – most vocally – by the biomarker’s discoverer, University of Arizona pathology professor Richard J. Ablin, who has called its overuse a “public health disaster.”

In its heyday, regular PSA screening was strongly encouraged and testing rates grew dramatically – along with a sharp rise in prostate cancer diagnoses. But when researchers later analyzed years of medical evidence, they realized these screening practices were leading to rampant over-diagnosis and unnecessary treatment of patients without a corresponding increase in survival. Like many other current screening methods, the PSA test has its benefits but is unable to tell the difference between a fast-growing, potentially lethal tumor and a non-cancerous or slow-growing lesion that a patient could safely live with. As a result, scores of men with virtually no risk of experiencing cancer symptoms in their lifetimes have experienced impotence, incontinence, and other lifelong complications from aggressive treatments they didn’t need.

“The test is hardly more effective than a coin toss,” Ablin wrote in 2014’s The Great Prostate Hoax: How Big Medicine Hijacked the PSA Test and Caused a Public Health Disaster. The PSA test’s fall from grace occurred amid similar confusion and controversy over recommended mammographies for breast cancer screening, while uniformly lethal diseases like pancreatic cancer continue to elude early detection altogether. All of these issues go to the heart of the need for novel early detection technologies like the cancer tracker.

Michael MacRae is an independent technical writer based in Oregon.

A new prosthetic hand offers amputees the ability to “feel” grasping and manipulating objects—and it’s already being used at home, outside the laboratory setting, for several months.

Fatigue failure is a possible failure mode for any product that experiences cyclic loading. Although it is a common concern in product design, fatigue failure is particularly insidious in implantable medical devices where a fatigue fracture may have lethal clinical consequences. Learn more in this webinar featuring Thomas Secord, University of St. Thomas, and previously of Medtronic. Dr. Secord's work has addressed many aspects of structural design, accelerated testing, and regulatory considerations for implantable devices.

Scientists use nano or microneedles to provide quicker diagnosis of major illness.

A new prosthetic hand offers amputees the ability to “feel” grasping and manipulating objects—and it’s already being used at home, outside the laboratory setting, for several months.

Fatigue failure is a possible failure mode for any product that experiences cyclic loading. Although it is a common concern in product design, fatigue failure is particularly insidious in implantable medical devices where a fatigue fracture may have lethal clinical consequences. Learn more in this webinar featuring Thomas Secord, University of St. Thomas, and previously of Medtronic. Dr. Secord's work has addressed many aspects of structural design, accelerated testing, and regulatory considerations for implantable devices.